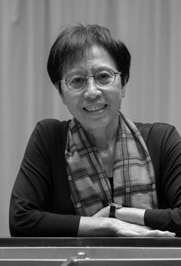 Professor Eleanor Wong began her musical studies in Hong Kong and later as an Associated Board Scholar at the Royal Academy of Music, London.She was one of the few students who graduated with both the Graduate Diploma (G.R.S.M) and the Recital Diploma, as well as top honours: the Walter Macfarren Gold medal and Majorie Whyte Memorial Award for the most outstanding students. After winning the coveted Boise Scholarship, Eleanor studied in Paris with Vlado Perlemuter and later in New York with Artur Balsam.

Winner of Silver Medal at the Viotti International Competition Italy, Professor Wong broadcasted on RTHK (Hong Kong), WNYC (New York), BBC (UK), and overseas services. As a soloist she has given recitals extensively in the United Kingdom (including the Wigmore Hall and Purcell Room in London), Hong Kong, and the United States, and with her sister as piano duo performed in Hong Kong, throughout China, and in the United States.

Professor Wong is recognized as one of the foremost piano pedagogues with many of her pupils winning top prizes in international piano competitions including the Chopin International Piano Competition, the Van Cliburn, the Leeds, Gina Bachauer, and the Casagrande. Being one of the most sought-after teachers, Professor Wong frequently hosted lectures and workshops on Piano Pedagogy and has given masterclasses in China, Korea, Poland, Singapore, Taiwan, Thailand, Uruguay, South Africa, England and USA. She is also a frequent member of jury in various international piano competitions and festivals.

Professor Wong is the Chairperson of the Piano Teachers’ Association in Hong Kong and Artistic Advisor of The Dalcroze Society of Hong Kong. She has served as Advisors for the Hong Kong Arts Development Council (ADC), Trinity Guildhall music exam
(Hong Kong).

In 2008, Professor Wong was elected one of 2007 Outstanding Leaders by Singtao Daily in Hong Kong for her contributions to the musical world.

In 2013 Professor Wong was awarded the Hong Kong Women of Excellence in the Six Arts for her work in field of Music by the Hong Kong Federation of Women.

In 2014, Professor Wong received the Medal of Honour from the Hong Kong SAR Government, recognizing her dedication and contribution to piano education and grooming of local young pianists.

In 2018, Professor Wong was honored with a Life Time Achievement Award in music education by the 5th Hong Kong International
Music Festival.