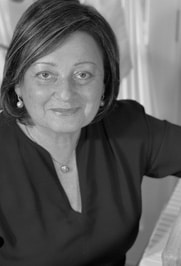 Faina Lushtak was born and raised in the Soviet Union. A child prodigy, she began her piano and composition studies at the age of six. She graduated from the Stolyarsky Special Music School for Musically Gifted Children. At the Tchaikovsky Conservatory in Moscow, where she studied under the renowned teachers Eleonora Levinson, Genrietta Mirvis and Yakov Zak, she earned degrees in piano performance and composition. She became a faculty member at the Conservatory and performed throughout the Soviet Union. In 1978, she immigrated to the United States.

Her performances have earned widespread critical acclaim. Reviewing her debut at Alice Tully Hall, The New York Times wrote: “The qualities she prizes most are clarity of line and transparency of texture. Incisive clarity remained her hallmark.” Fanfare described her “vibrant, dynamic readings, delicate expressiveness and a dazzling virtuosity.” The Times-Picayune wrote that “her technique is sure and ample. Her tone varies from a beautiful, singing lyricism to a more matter-of-fact solidity.” And The Ledger in Lakeland, Fla., described her playing as “very brilliant, very romantic, very colorful and stylish.”

Fiana Lushtak is the Downman Professor of Music at the Newcomb Music Department of Tulane University, where she heads the piano division. She is also music director of Tulane’s Concert Piano Series. Ms. Lushtak is on the faculty of the Orfeo International Music Festival in Italy. She is a Steinway Artist.

Her performance of works by Rachmaninoff and Scriabin has been recorded on the Centaur label. Centaur also released a subsequent recording of Chopin Mazurkas. Her compositions for piano, chamber music groups, voice and violin have been published in the U.S., the United Kingdom, and the former Soviet Union.