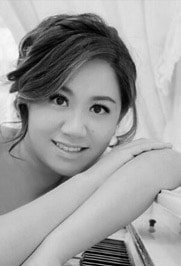 Taiwanese-American pianist and violinist, Fantee Jones of Roseville, California gave her first solo recital at the age of seven and made her concerto debut performing Mozart’s Piano Concerto in A Major, K. 488 at age ten. She has continued her noteworthy accomplishments winning many awards in various international competitions. She was a semi-finalist at the 2020 National Chopin Piano Competition, winner of the 2019 Eastman School Concerto Competition, finalist at the 2018 Serge and Olga Koussevitzky Young Artist Awards, prizewinner at the 2018 Los Angeles International Piano Competition, and a winner of the PianoTexas International Young Artists Concerto Competition, among others. As a result, she performed the Prokofiev 3rd Piano Concerto with the Fort Worth Symphony Orchestra, under the baton of Lio Kuokman.

Miss Jones made her first Carnegie Weill Hall appearance in May 2005 and has also performed at Benaroya Hall and Lied Center of Kansas in the United States, National Recital Hall in Taiwan, Sendai City Cultural Center in Japan, Seoul Arts Center in South Korea, Temppeliaukion Kirkko “Rock Church” in Finland and Verbrugghen Hall in Australia, as well as on Cunard and Princess Cruise Lines.

In addition to the piano, she also plays violin and flute. Miss Jones was a member of the Sacramento Youth Symphony (SYS) Premier Orchestra first violin section for five seasons. She went on the European tour with the SYS in 2007, performing on both piano and violin. Miss Jones has also served as one of the Evening Division piano accompanists at the Juilliard School, playing piano concerti and violin sonatas with various pianists.

Miss Jones began piano training with her mother, Tiffany Jones, at the age of three. Her past teachers include Tien Hsieh, John McCarthy, and Dr. Marc Silverman. She received her Bachelor of Music as the recipient of the distinguished Roy M. Rubinstein prize at the Manhattan School of Music and a Master of Music degree from The Juilliard School in 2016. She was a recipient of the Elizabeth Parisot prize and graduated with a Master of Musical Arts degree from the Yale School of Music in 2018, studying under the tutelage of Hung-Kuan Chen. Most recently, she was the recipient of the Excellence in Accompanying Awards at the Eastman School of Music, where she continued her studies with Alexander Kobrin and completed her Doctor of Musical Arts degree in Piano Performance and Literature and a Minor in Piano Pedagogy.